I think a good landscape should be enticing and thought-provoking. The power of landscape design is immense and should never be underestimated. As I mentioned before for this reincarnation of Tuner I plan on bringing it back underground to grow the sense enclose, need for air and to assist in the game plays interactions of fish collecting practices.

The Scanner is like a radar mechanism, when found and attached to the boats roof hook, all 3 of it orbs rotate about their orbits, at each turn displacing a line to their nearest corresponding subject, ie Fish, Junk and Rockets. All these three orbs speeds can be controlled individually sonically creating an ever phasing sequence. Initially this control was access via the Midi protocol each orb having their own physic knob here on earth. But now the foam of interacting will need to be re-designed into the GUI interface.
The scanner is also a lantern for dark zones epically when the internal torchlight fades due to the boats’ strength depletion . I will supply the new scanner in operation (video), here below are some (blurred) old in game shots.

The world’s past that Tuner inhabits is not totally know but one thing for sure was it that it is a relic of a vast manufacturing of some sort. A kind of off world mass production station that has now been abandoned. In parts of the landscapes we find Drainers, they are often the source of where fish are. They are forms of filter mechanics and it is here we find fish trapped but also in surrounding zones the caretakers the ‘Staff’. In order to re ignite a Drainer we first need to find a Staff member. Some Staffs are often imprisoned when found bribing off drains by-products. So it is a combination of freeing staff taking them to their machines and then saving fish. The story of staff being imprisoned by making profit off machines spin off resources is a remark I would like to grow upon of our own worlds manufactured waste.
After the Drainers are re-ignited the audio has a chance to become more rhythmic through the pumping and cycling act of the devices freeing fish everywhere. This worked OK during live performances but I want to design the act of freeing fish to be more Intune with the landscape design. The fact is these initial Drainers look to out of place and I got to fix this.

The idea of prisons was meant to be a fun way of story telling via the interactions of the prisons’ architecture (locks, passages) and freeing of staff members!
It is an ace way of utilizing a landscapes form to entice immersion through it’s designed structures. Currently, there are only three designs two being purely static cages and one (pictured above in blue) the rotated causing the timing key to be able to grab a staff member. I plan to construct classic lock systems and distractable forms that push the in game physics’ engine creatively. Physics is another key aspect of the project. In an early version I ran the program on an experimental Nvidia branch that allowed for real-time physic based liquid simulation and hi fidelity destruction. Due to instability issues and limited platform portability I’ve declined these but still can get great effects from the classic internal physics (+chaos) 😉 .
Here is an image of the now static cage Prison that used to fall apart when trying to entire a staff member out. 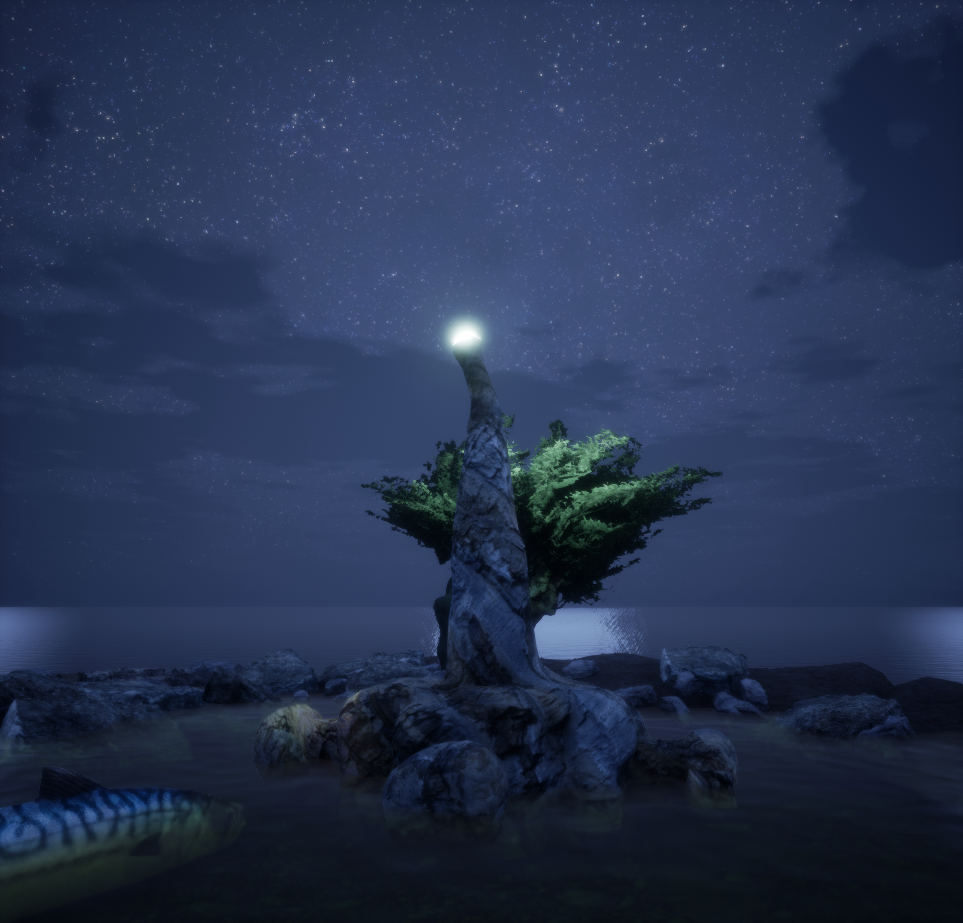 Above image of lone staff member poised in pool beside a mackerel and bush at night. The way staff members were originally designed was so that their four feet and tail like neck could bounce and flick them about and it does quite well, layered with audible collisions the staff member when awoken can dance to work.

Bins are used to rid of junk floating in the water works. By ridding of Junk and sending them to a bin they get processed and in turn feed the boat. The boat never really runs out power. but some internal elements (such as boost, torch, laser, radio power and scanner) require elements recycling in order to function 100%. Above is the corkscrew and cross box below is the Gate Crusher.

The idea of a gate having a crushing system was that the energy from waste was being shared also in other structures and in turn will allow the gate to open forcing the player to learn their good ways.

The Rocket is the life pod for each “fish” and ascends them to a safe place far far away. The project has gone through different version in all aspects and still does, but one thing I will admit is strange, but in its bizzar nature I like, is that the act of freeing a fish by air I find symbolic considering they are already in a world of water (toxic on non-toxic). In this day and age we humans have become so God like how we think of other species that the act of teleporting an animal is not so far-fetched in the amount of constructive change we need to give back to our planet right now.

This site uses Akismet to reduce spam. Learn how your comment data is processed.